Machine learning is driving development across many fields in science and engineering. A simple and efficient programming language could accelerate ap…

In this paper, we systematically review and summarize the development of the Julia programming language in the field of machine learning by focusing on the following three aspects: 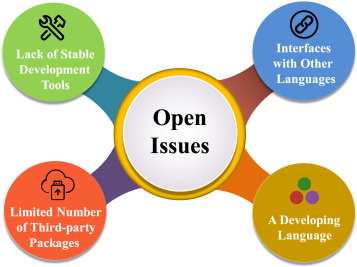 Although Julia has developed rapidly, its influence is far less than that of other popular programming languages. After several versions of updates, Julia has become relatively stable, but there are still several problems to be solved.

Julia’s grammar has changed considerably, and although these changes are for the sake of performance or ease of expression, these differences also make it difficult for different programs to work together.

One of Julia’s obvious advantages is its satisfactory efficiency; but to write efficient code, one needs to transform the method of thinking in programming and not just copy code into Julia. For people who have just come into contact with Julia, the ease of use can also cause them to ignore this problem and ultimately lead to unsatisfactory code efficiency.

Currently, the commonly used editors and IDEs for the Julia language include (1) Juno (Atom Plugin), (2) Visual Studio Code (VS Code Extension), (3) Jupyter (Jupyter kernel), and (4) Jet Brains (IntelliJ IDEA Plugin). According to [137], Juno is currently the most popular editor.

These editors and IDEs are extensions based on third-party platforms, which can quickly build development environments for Julia in its early stages of development, but in the long run, this is not a wise approach. Users need to configure Julia initially, but the final experience is not satisfactory.

Programming languages such as MATLAB, Python and C/C++ each have their own IDE, which integrates the functions of code writing, analysis, compilation and debugging. Although editors and IDEs have achieved many excellent functions, it is very important to have a complete and Julia-specific IDE.

5.4. Interfacing with other languages

Currently, PyCall and Call are used in Julia to invoke these existing libraries, but Julia still needs a more concise and general invocation method. More important is finding a method to ensure that the parts of these calls can maintain the original execution efficiency or the execution efficiency of the native Julia language.
At the same time, it is also very important to embed Julia’s code in other languages, which would not only popularize the use of Julia more quickly but also combine the characteristics of Julia to enable researchers to accomplish tasks more quickly.